During this full moon period, the Black Mambas where on high alert and increased their patrols and routes. Visual policing and early detection of any suspicious activity and detection of any entry points is the main focus.

Fortunately this full moon period was rather quiet, with not much anti-social and criminal activity. We will continue to work hard as to keep this trend up.

Snare sweeps:
Sweeping for snares is an important aspect of The Black Mambas role. Throughout the month of May a total of 75 snares have been found. The snares have been found on the outskirts of Balule in three areas, Doreen, Paul, and the Buffer zone Epsom. No snares have been found inside the reserve. Snare sweeps are performed on a regular basis during the full moon period and outside this period, Golf 1 and November 1 where responsible for locating and removing 67 snares in Doreen and in Paul, tribal land north of Balule reserve Oscar1 where responsible for locating and removing 7 snares in the Epsom buffer zone west of the western fence in Olifants West, the Juliet 1 team did not find any snares during this month, however snare sweeps were preformed.

A comparison between new snares and old snares
In comparing the snare charts with previous charts there is a trend of less new snares being found, thus set, with this information we can deduct that, for the most part, less snares are being set. This is positive news, the more we sweep and clear areas we are pushing the meat poachers further and further away from our reserve and surrounds land. We will continue to work hard at this as to keep pushing the threat out of this area. It is still troubling at the amount of snare being pulled out of the surrounding land. For that reason the Black Mamba will not reduce the amount of snare sweeps preformed.

17/05/2016
There was one gunshot reported in the Jejane reserve, at Uniform 20 by residents at Nthaba House, the Jejane Black Mamba team were deployed and patrolled the Southern, Eastern and Venice/MRNR area and fence from Quebec 25 to Yankee 22 and Yankee 22 to X-ray 18 and X-ray 18 to Romeo 20 as well as in the triangle in the southern fence X-ray 20 to Uniform 21 in search of any entry points, human or suspicious activity. Nothing of the like was found. The team did, however find a herd of around 30-40 elephants in the grid reference X-ray 20. The team patrolled these areas as the report came in and the following morning but no entry points, human or suspicious signs were found.

22/05/2016
In the Jejane reserve the fence alarm went off on the southern fence line between Uniform 23 to Tango 24 at 12h30-13h: 30. The Black Mamba team were deployed and patrolled that area thoroughly and found no entry point, human or suspicious activity, the team did find zebra tract that had run into the fence causing the alarm to go off.

22/05/2016
Again in the jejane reserve, the fence line alarm went off in the southern fence line between Romeo 20 to Tango 24, the Black Mamba team were deployed and patrolled the area in search of entry points, human or suspicious activity, however, nothing of the like was found. The team did find signs of an impala trying to get through the fence unsuccessfully.

21/05/2016
An incursion occurred on Grietjie where three sets of tracks heading in a south direction was picked up in Qubic3. The Bravo1 Protrack team started tracking the spoor, the spoor then started moving in a south western direction where the Black Mamba team met up with the Protrack team at Pappa4. The two teams, the Black Mambas and Protrack Bravo 1, then started following the spoor together on the road moving south and then turns west towards
Tango5. The spoor then turned south and went all the way to the crossing point on the river at tango7.
The spoors was 1boot, 1tekkie and 1flatsole, the spoor moved to a house in cubic 3 where they went into the compound and used a workers cell phone to call a pickup vehicle .
They then proceeded to their pick up point where they had to travel through Maseke game reserve, on the way out the poachers found a waterbuck carcass and took some of the meat they exited too the R40 at November1 where the vehicle picked them up .
The workers did recognise the poachers and the information has been given the crime intelligence officers and on the workers cell phone there was a photo of the suspects recognised as Eugene Matabula, the case is now under investigation.

The Black Mamba expansion program:
The Maseke Black Mamba trainees have come a long way since the start of their training five weeks ago. Their development and growth has been satisfying, from: radio procedure, parade, fitness levels, arrest procedure, snare sweep skills, spotting of spoor, identifying anti-social signs on fence line patrols, and team moral has grown in leaps and bounds.
At the beginning of the training process the trainees where situated in Jejane, this was the ‘in house’ training, senior mambas played a huge role in shaping the trainees into the ethos of what being a Black Mamba is all about, here they were taught what is to be a Black Mamba, from the Parade, search and seizure and arrest procedures, radio protocol and a great deal of fitness. From there the trainees went to the

Campfire academy to do a week’s wildlife course, they were taught have to identify spoor, learn about dangerous game behaviour and how to react when an encounter is experience, the course was to teach the trainees all about the do’ and don’ts in a wild environment. The trainees were exposed to encounters with dangerous game such as Lion, elephant and buffalo sightings on foot and in the vehicle, this is an important aspect of the training as they will have these encounters while on duty and for safety reasons they need to understand how to react. This wildlife course was very successful as it develops a real interest in these trainees about wild environments, we feel it is important for them to enjoy and build a passion for the bush as to help them do their job to the best of their ability. When this curse concluded the trainees were deployed in Grietjie and Olifants North pickets with experience Mambas, this aspect of the training is for the trainees to get some experience and exposure as to what the job entails on a daily bases and to learn from the existing mambas. The trainees have been going on daily fence patrols, night vehicle patrols, snare sweeping, as well as continuing to practice their radio procedure, arrest and search and seizure protocol, parade and fitness.

The trainees have a week left in their respective pickets before they get a five day rest before they attend the Protrack training course that will star on the 9th June. We are very pleased with the trainee’s attitude, development and progression.

Retrieving November from Doreen:
On Wednesday the 25th May the Black Mambas team Golf1 found black rhino tracks outside the reserve in the neighbouring tribal reserve Doreen. This became an urgent issue to locate, identify and get the rhino back into the reserve as there is not a great deal of security in that reserve and there was a need to get the rhino back into Balule as to prevent anything from happening. This operation involved all our resources from head warden, wardens, protrack, security managers, veterinaries, rhino monitors, Black Mambas, and a great deal of machinery such as helicopters, and vehicles.

The Black Mambas plays a small but vital role in this situation, firstly the Mambas identified the problem and called it in to the appropriate people who would then take action to solve the situation and get the rhino named November back into the reserve, secondly, the Mambas helped by being a part of the tracking team, sweeping for tracks and snares in the Doreen area during the operation and were deployed where they were needed. The operation took the course of four days which was due to a number of factors, Some of those factors were, the weather and terrain, locating and identifying the rhino, the rhino not responding to the helicopter as we had hoped, black rhino having the ability to disappear, to name a few.

Due to the terrain and how deep into the tribal land November had ended up, the plan was to locate, dart and airlift November back into the reserve by the helicopter. On Sunday the 29th this plan was set in action and preformed swiftly and successfully. November was located early in the morning, the helicopter moved into to area, darted him, the ground team, which included a couple Black Mambas, moved in to help attach November to the harness of the helicopter and then he was airlifted and flown back into the safety of Balule, he is now back on his feet, healthy and protected. A big thank
you needs to go out to the main role players of this operation, Rian Alhers, Johan Grobler, Dr. Peter Rodgers and everyone else who played a role, thank you and well done.

All teams are now also reverting back to their usual routines of day light fence patrols and sweeping the reserve and ‘buffer zones’ for snaring activity, as well as ‘ad-hoc’ night patrols, building site inspections and road blocks. Thank you to all of our donors, sponsors and supporters for your continued interest and support. 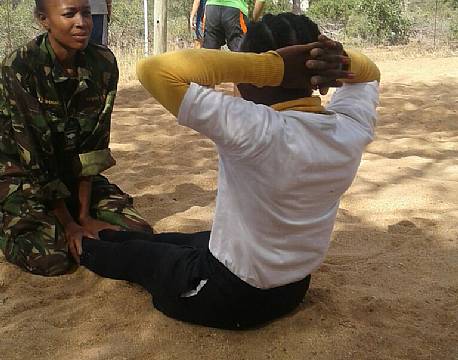 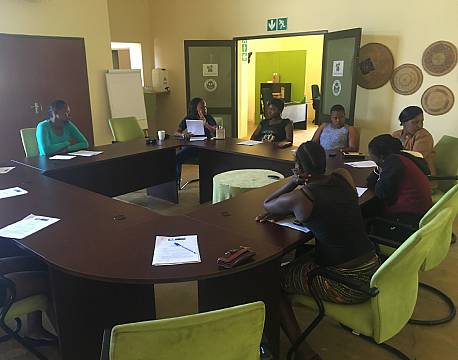 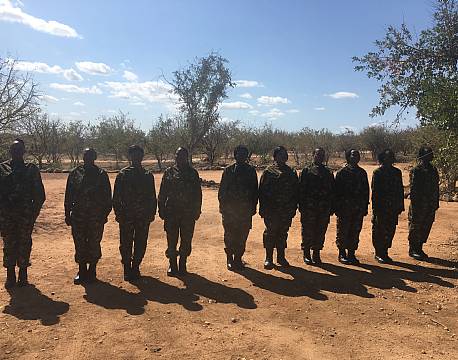 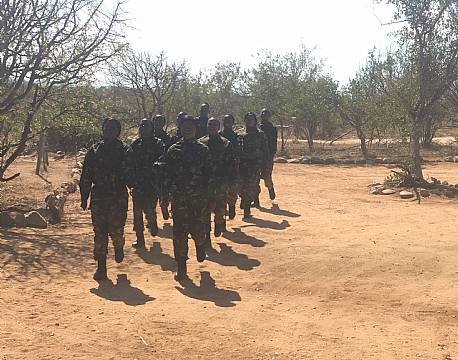 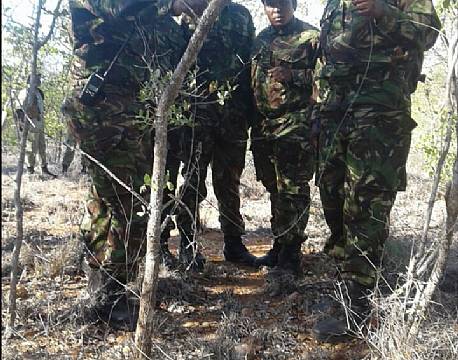 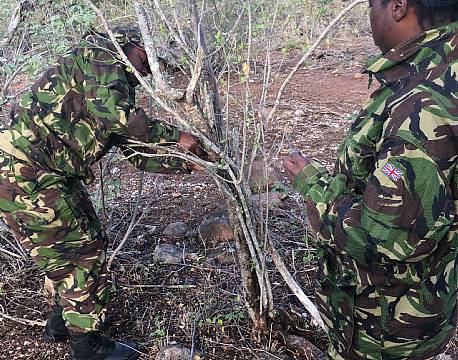 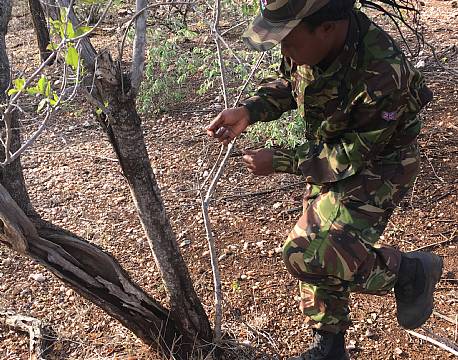 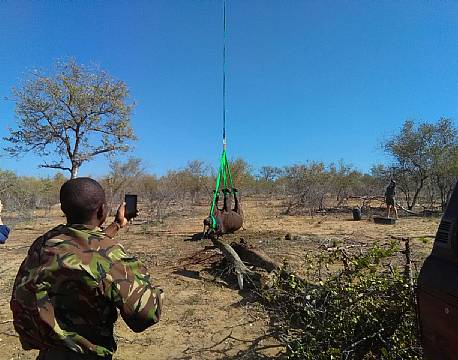 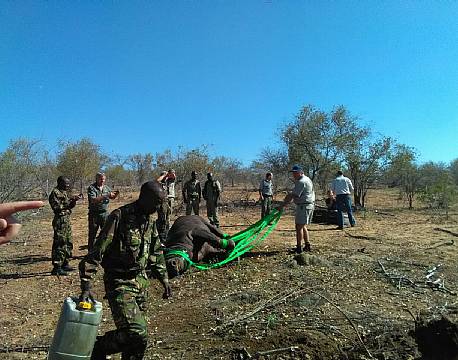